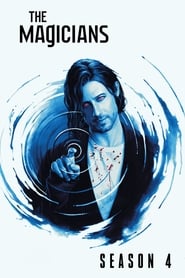 Season 4 picks up directly after the cliffhanger, in which the quest to restore magic has been successful, but it’s now strictly rationed between the Neitherworld librarians. Also, Dean Fogg has successfully saved the lives of his erstwhile Brakebills magic students with a spell that acts as a witness protection program. Although Alice hasn’t been affected, she’s in a jail cell, while Quentin, Julia, Kady, Margo, Penny, and Josh have been given new identities on Earth, but they’ve also forgotten their real ones. For all they know, they are their alter egos — even the guy known as DJ Hansel. Such extreme measures were necessary to protect them from a merciless shape-shifting creature known only as the Monster, who wants to exact revenge for their attempt on its life.