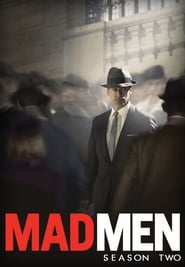 Season two takes place between February and October 1962, culminating with the Cuban Missile Crisis. It expands on Peggy’s rise in the workplace and the marital strife between Don and Betty Draper as Don’s infidelities further intrude on his family life. The second season also introduces an unknown acquaintance of Don Draper. Draper is corresponding by letter with this unseen acquaintance in secret.