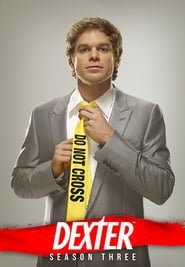 The third season of Dexter premiered on September 28, 2008, and ended on December 14, 2008. “Our Father”, the season premiere, attracted 1.22 million viewers in the United States, making it Showtime’s highest-rated drama season premiere since Nielsen Media Research began compiling ratings in 2004. The season’s finale, “Do You Take Dexter Morgan?” attracted 1.5 million viewers. Season three was watched by an average of 1.1 million viewers a week. It received largely positive reviews from critics, which ranged from being praised as “truly and incredibly exciting television” in the San Francisco Chronicle, to “lack[ing] the crackling tension the drama had supplied in previous years” by the Chicago Tribune; the aggregate site Metacritic scored the season at 78 out of 100 based on 13 reviews. Smits and Hall received Emmy nominations for their roles as Miguel Prado and Dexter Morgan respectively, while the show as a whole also received a Best Drama Emmy nomination. In this season, Dexter kills a man in self-defense and initiates a friendship with the man’s brother, Assistant District Attorney Miguel Prado. In the meantime, Rita discovers that she is pregnant, and Debra investigates the murders of a new serial killer, called “The Skinner”, hoping to gain a promotion to detective. In addition to Smits, Dexter’s third season introduces two recurring characters: Desmond Harrington as Det. Joey Quinn, who becomes Debra’s partner when he is transferred from the narcotics department to homicide, and Anne Ramsay as Ellen Wolf, a defense attorney whom Miguel detests.