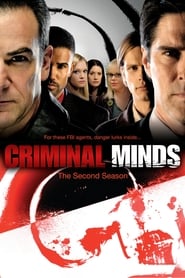 The second season of Criminal Minds premiered on CBS on September 20, 2006 and ended May 16, 2007. Lola Glaudini left the show after six episodes, and was replaced by Paget Brewster two episodes later. Having been a guest star for Season 1, Kirsten Vangsness was finally promoted to series regular, coming last in the opening titles after A. J. Cook.