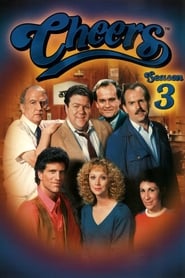 The third season of Cheers, an American television sitcom, originally aired on NBC in the United States between September 27, 1984, and May 9, 1985. The show was created by director James Burrows and writers Glen and Les Charles under production team Charles Burrows Charles Productions in association with Paramount Television. The third season is available on DVD in a four-disc set. The season marks major events that affected, or could have affected, the show. Kelsey Grammer made his debut as psychiatrist Frasier Crane, intended as part of a love triangle with Sam and Diane for the season. Actresses Rhea Perlman and Shelley Long were pregnant; Perlman’s pregnancy was written into her character, while Long’s was hidden to avoid effects on her character. This was the final season for Nicholas Colasanto as Coach Ernie Pantusso; Colasanto died of a heart condition which worsened during production, contributing to his absence from a number of episodes before his death in February 1985.