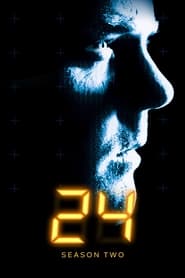 Season Two, also known as Day 2, of 24 was first broadcast from October 29, 2002 to May 20, 2003. The season begins and ends at 8:00 a.m. The season premiere originally aired without commercial interruption, and has an extended running time of approximately 51 minutes, as opposed to the standard 43 minutes.