Bart and Lisa want to start getting their hair cut at the mall. They go to the mall with Homer and while getting their haircut they get into a fight, which results in them each getting really bad haircuts. Out in the mall they are spotted by fellow school students who have cameras in hand. They find Homer and go on the run; they sneak into the back entrance of a movie theater and see the film “Left Below,” which is a movie about the apocalypse. The images in the movie are disturbing to Homer, who fears the worst. Marge assures him that there needs to be some ominous signs before the rapture will come. When Homer is out driving, he sees what he believes to be the signs. Homer gathers some books on the subject and he calculates that the “rapture is nigh” at 3:15 PM on May 18th, seven days from now. He starts to spread the word and tells everyone on television a passage from Revelations 6:13 that says before the rapture “the stars will fall to Earth.” At the Springfield Stadium, there is a celebrity filled blimp accident that causes the stars on board to fall to the Earth and Homer gains instant credibility. He gets a bus full of people to join him at Springfield Mesa. When the appointed time comes and goes, Homer loses credibility and everyone return back to their normal lives. Homer later realizes that he made a mistake in his calculation and the new time is only 30 minutes away. When no one in his family will join him Homer goes to the Mesa on his own. The rapture comes and Homer goes to heaven, but despite all that heaven has to offer, Homer needs his family. He gets an audience with God, but when God won’t grant his request to have his family join him; Homer begins raising hell in heaven. To put a stop to it, God agrees to turn back time and put off the rapture. 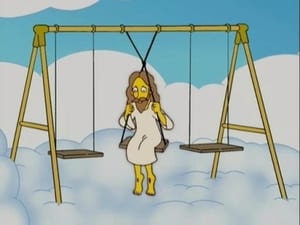