At Springfield Elementary the new vending machine contract is awarded to a company that promises to give half the profits to the school and it is of little consequence whether the snacks are healthy for the children or not. Bart begins taking all of his meals from the vending machine and three weeks later has gained a lot of weight, so much so that he has heart attack symptoms as a result. The X-Ray shows that malted milk balls have blocked his arteries. Despite it all Bart continues to eat junk food. Marge has no choice and holds an intervention, which Bart escapes from, right into the hands of representatives of a maximum security fat camp who take him away. Bart finds himself Serenity Ranch with Kent Brockman, Apu and Rainer Wolfcastle. The first bill from the ranch arrives and Marge decides they need to find a way to pay for it. They open their house up as youth hostel to German tourists. Having a hard time getting through to Bart, Tab Spangler takes him home and shows the horrors his family is enduring on his behalf. Bart finally gets the message and rages against the vending machines and is cured of his junk food addiction, there are three non-refundable weeks of fat camp available for a family member to use. Homer, the obvious choice, is elected to go. 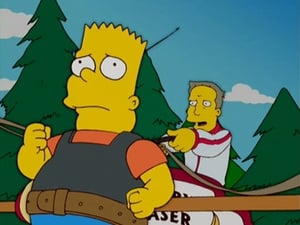