Ren Stevens looks like a shoo-in for “Student of the Semester” and among her biggest supporters are Principal Wexler and two admiring young cub reporters, Carla and Marla, who are writing about her for the school paper. But the unthinkable could happen: in Mr. Rupert’s wood shop class Ren may get a “C” on her final project. Louis helps her to cope with the possibility that she may have to accept less than perfection. Meanwhile, Louis’ locker has become a mess, and it’s not all his fault this time, as a broken steam pipe is creating new life-forms in the muck. Principal Wexler gives him a dusty old janitor’s closet as a temporary space, and Louis uses it to create “Casa de Fiesta”, a spot which becomes as popular as Studio 54 among the students. 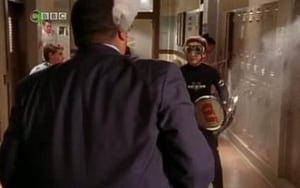