Battle of the Bands

Louis is managing Twitty’s band. They’ve got a chance for a gig at a big party thrown by Jason Bagwell, so they are auditioning for a lead singer. Ren hates the band until she gets a look at Jason, then she decides she wants to be the singer in order to go to the party. Louis says no way, but the band likes her much better than the parade of freaks they’ve been auditioning. Fearing Ren will take over, Louis puts Ren’s membership to a vote. The band all vote for Ren and against Louis. Frustrated, Louis gets Tom to program a few instuments and he forms a rival techno band featuring the bizarre poetry of Tawny. Both bands audition before Jason. He rejects them both, but proves himself to be such a jerk that no one wants to get the job anyway. The two groups form a “”super band”” and play their own big gig–at a kids’ birthday party. 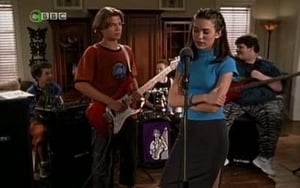